Embodying emotion: where do we feel it?

Embodying emotion: where do we feel it?

The Body and Being Network is a research initiative that aims to develop innovative interdisciplinary dialogues about the body. It supports collaborative encounters between scholars and performing artists, and challenges participants to develop analyses that involve their own embodied experiences. 'Embodying emotion' aimed to explore a range of questions about the embodied expression of emotion. Where does emotion reside? How do we share it? To whom does it belong? Our performance of Myrrha would act as a springboard for further discussion of these and other questions such as, why use a mask when conveying emotion? Where is emotion located? Where is it held? Where does it come from and what boundaries does it cross? Who shares in emotion?

More than anything, during this event, I was struck by the notion of performance as a shared experience of emotion between character, performer and spectator. Last Wednesday's spectators were in fact, to borrow Augusto Boal's term, 'spect-actors', responding to our performance in a rich exchange of emotions. In the generous discussion that followed our performance, audience members revealed how they physically 'felt' the performance : as tension in the neck and arms, or of being drawn forward from their seats so much so that they wanted to 'leap' into the performance space to save the harrowing drama from taking place, or in 'feeling' the weight of Myrrha's emotion – the burden in her viscera, the burden in her womb. I realised that Myrrha is indeed a visceral piece in the truest sense of the word.

We spoke too of the resonance of emotion in the body, the resonance of sound, music, text, and feeling, of how emotional energy resonates through the body. With each character I play, I deliberately start work by choosing an energy source that is clearly located in some specific part of the body from which a character's energy radiates out. It is this energy source located in that centre that leads the rest of the body through space. Emotion is not excluded from this process but is at its very core: I try to make an emotional as well as physical commitment to that centre. Myrrha's centre is unsurprisingly located in her womb – and it was interesting to hear the audience say, without knowing about my process of working from movement centres, that they felt the energy of the performance resonate in their viscera too.

However, the fact that I perform Myrrha with the neutral mask means a constant negotiation back and forth between this off-balance centre to the neutral, 'centred' body. So, why use this mask when conveying emotion? The neutral mask has no expression which means it is capable of every expression. It depersonalises (what Peter Brook calls that 'sense of liberation when liberated from your own subjectivity') and essentialises the wearer – you discover what is uniquely you. The neutral mask is not designed to be performative, but I have increasingly felt that for Myrrha, it works. Denied of emotion to be read in facial expressions, the mask puts the emphasis on the embodiment of emotion in different parts of the body, which paradoxically seems to make audience 'see' a range of emotions flicker across the masks face – passion, shame, despair, Myrrha's first and only smile at her newborn child – even though these facial expressions cannot, in reality, actually be there. As well as revealing the extreme (someone described it as 'alien') physicality of the piece, the mask also expresses Myrrha's very human vulnerability. I have tried to play Myrrha without the mask in rehearsal and when I did, I felt very vulnerable as a performer: in putting on the mask, I am able to let go of my own (the performer's) vulnerability and allow the character to be vulnerable.

Interestingly, to this audience made up not only of classicists, but of anthropologists, medics, dance therapists and neuroscientists, we performed the piece without giving any prior synopsis of the story. This was partly because Mal and I were keen to use the experience as an experiment to see how much of the narrative was 'readable' on its own, with the newly added layers of text recited in both Latin and English which are now part of the score. What was interesting in the discussion afterwards was that those who didn't know the story beforehand responded with key 'things' that they had seen which were all linked to an recognition of the emotional states played out. They claimed to have seen (forbidden) passion, shame, despair, a pregnancy, birth, maternity – in fact, they had pretty much seen the whole story. The audience recognised and responded to everything that is human emotion in this piece. The only thing that was not immediately 'readable' to them was Myrrha's transformation into something inhuman, the tree. And yet one audience member described this moment as a death. The way in which I have worked in this section on the embodiment of the material in the physical (blood turning to sap, marrow hardening, bone turning to wood) rather than on the emotional content / playing a state, as I do throughout the rest of the piece, then reads as death, which I suppose in one way it is...It is Myrrha's letting go of human life, her resignation, sinking into the wood as it rises to meet her... 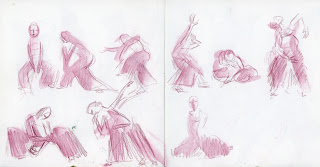 Sketches of Myrrha reproduced by kind permission of the artist Imogen Foxell.
Imogen is an Oxford-based lexicographer, classicist and artist: www.imogenfoxell.com

Posted by Marie-Louise Crawley at 10:35