On Metamorphoses: Ovid and Jung

So - we've shown our work-in-progress in the striking Al-Jaber auditorium of Corpus Christi College Oxford, in front of what turned out to be a very enthusiastic audience! (Looking for pictures of the event? Check out our images section!)
The response to our performance was amazing, and so very rewarding - we still feel like it's work-in-progress though (and accordingly, we didn't plan any fancy costumes or lighting as the pictures in the gallery show). Here was our programme (click on pictures for a larger view): 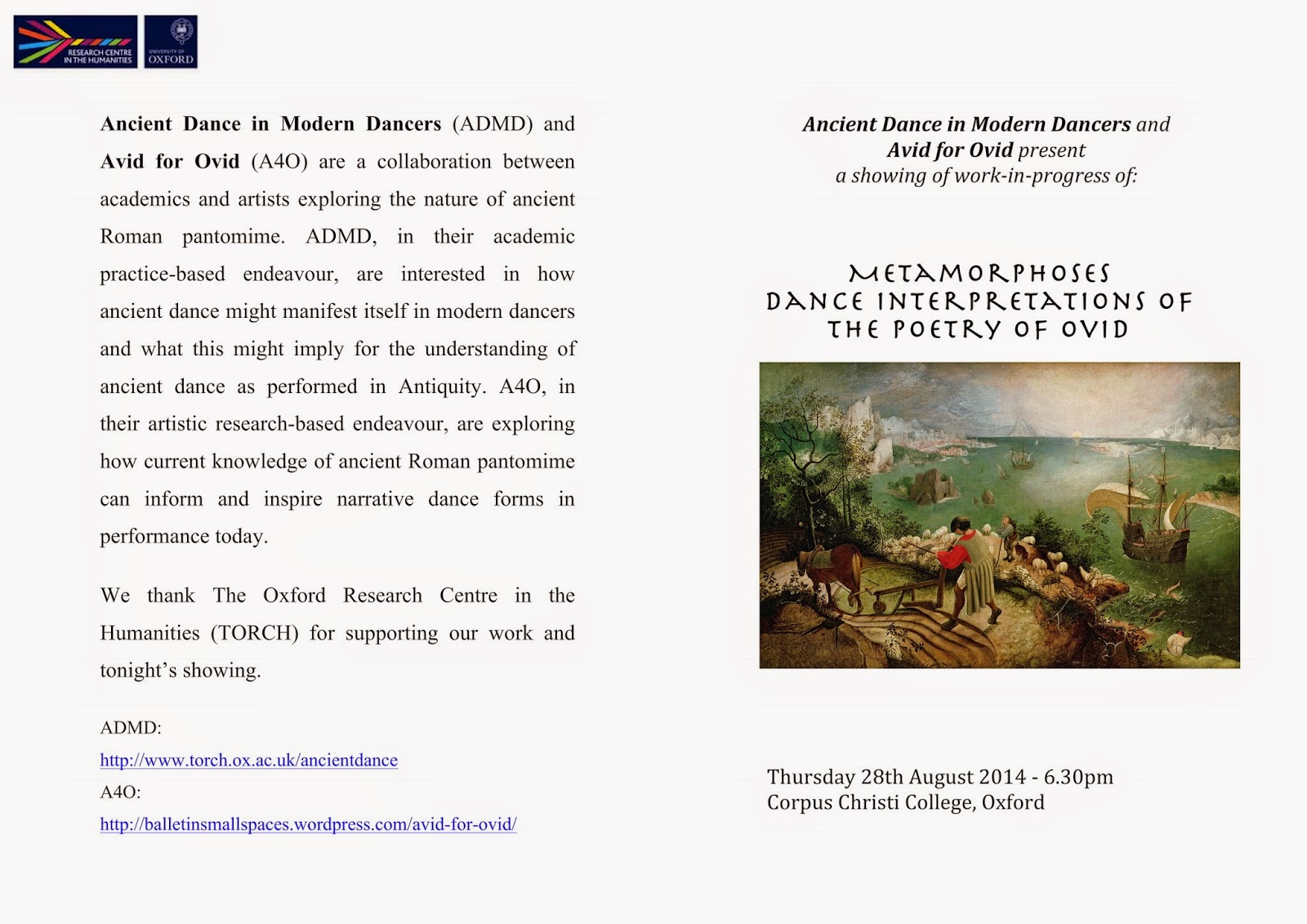 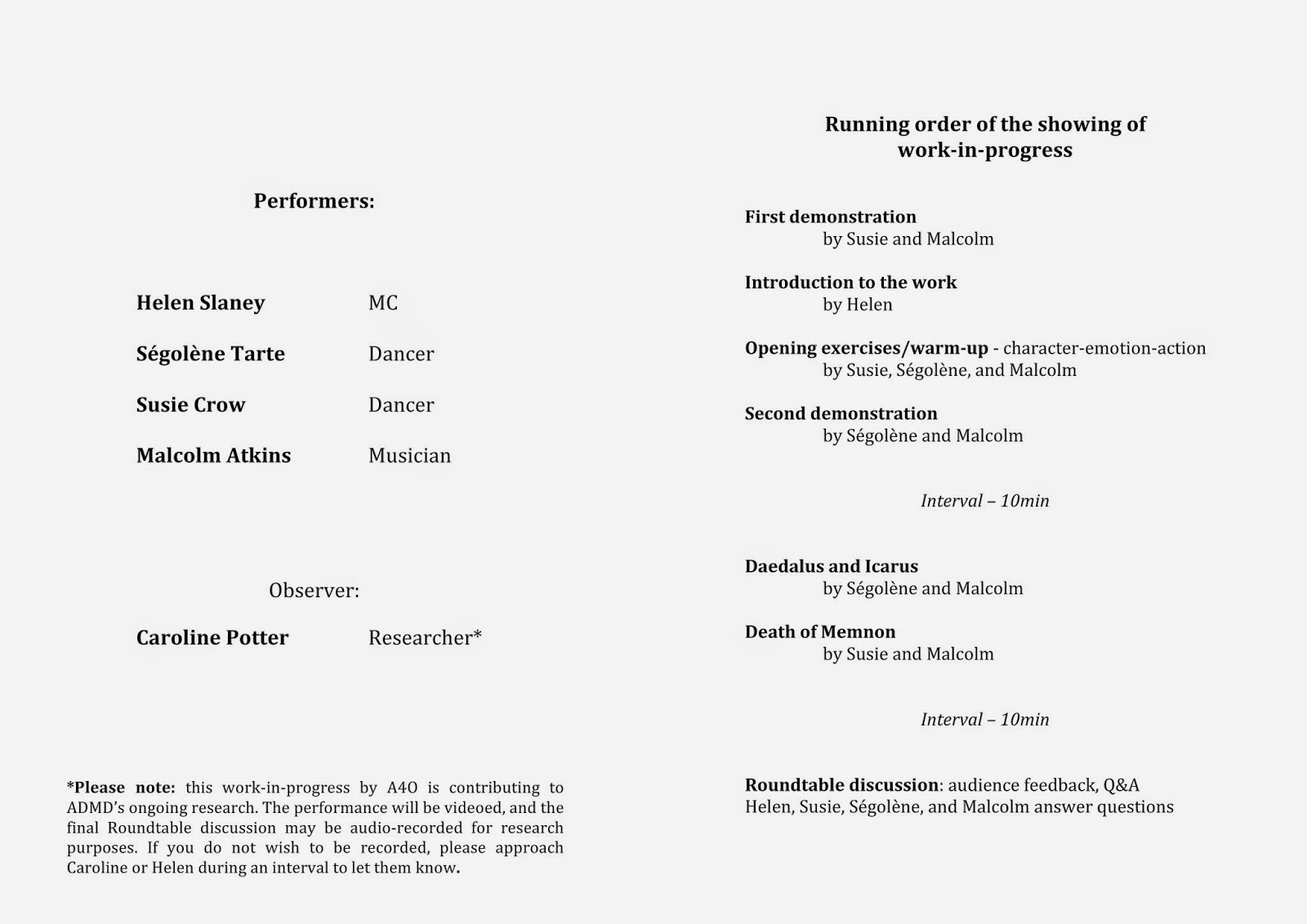 The programme allowed ample time for questions and answers with audience members, and we were able to give people a glimpse into the creative process that we, Avid for Ovid, have adopted.
One of our main "warm-up" technique has been to set ourselves exercises whereby we set out to improvise around a character (either named or identified as a typical profession), an emotion (or state - as defined by the greek word pathos), and an action (one in the list of choreographic terms from the original ADMD May 2013 workshop), these are randomly associated from three lists which we had previously drawn up. Examples of such triplet associations would be: Vulcan/doubt/extending-reaching; or Minerva/joy/walking; or sailor/grief/head-tossing (these are three of the four random draws we interpreted at the showing). This technique, although sometimes very unsettling is very effective when it comes to establishing characteristic gestures or stances for a character and setting it in motion. And when the audience was blind to the random triplets (as it was the case for two out of the four draws we made), it was extremely rewarding that they could identify what the triplet was. Even more so when they seemed to naturally append a story to a triplet; as an example, when I did the sailor/grief/head-tossing triplet, it was suggested I might have been Ulysses.
This seems to point to the fact that even if we don't set out to tell an actual story (each triplet defines a basis for a character study rather than a story) both as a performer and as an audience, we have a natural tendency to make up a story that explains the association.

And that is already fascinating in and of itself!

It also leads us back to the question of how we can make ancient Greco-Roman myths resonate in our contemporary society. Instinctively, I believe that any kind of resonance comes through emotional connection - and this has naturally lead me down the route of Jungian archetypes. In ancient Rome, it would have been reasonable to expect that everyone knew the myths, at least to some extent, but in contemporary society we cannot realistically assume a collective knowledge of these ancient myths - so what might be a common ground that we might be able to rely upon? Have any of these stories been conveyed down to us in different/modified forms, through folk and fairy tales for example? And this is where Jung's theory of archetypes and collective unconscious becomes an invaluable source of inspiration. Here are some of the texts I consulted throughout the process (and which I am still reading).
If you missed our work-in-progress and this has intrigued you, Avid for Ovid will be making a short appearance (twice 15 min, at 15:45 and 16:45) at the Festival of Ancient Tales on 3rd October 2014 organised by the IRIS project, feel free to come along...
And we're still planning a full performance of course... Stay tuned :)